KAIST mathematicians and their collaborators at Florida State University have identified the principle of how aging and diseases like dementia and obesity cause sleep disorders. A combination of mathematical modelling and experiments demonstrated that the cytoplasmic congestion caused by aging, dementia, and/or obesity disrupts the circadian rhythms in the human body and leads to irregular sleep-wake cycles. This finding suggests new treatment strategies for addressing unstable sleep-wake cycles.

Human bodies adjust sleep schedules in accordance with the ‘circadian rhythms’, which are regulated by our time keeping system, the ‘circadian clock’. This clock tells our body when to rest by generating the 24-hour rhythms of a protein called PERIOD (PER) (See Figure 1).

However, it has remained a mystery how thousands of PER molecules can simultaneously enter into the nucleus in a complex cell environment where a variety of materials co-exist and can interfere with the motion of PER. This would be like finding a way for thousands of employees from all over New York City to enter an office building at the same time every day.

A group of researchers led by Professor Jae Kyoung Kim from the KAIST Department of Mathematical Sciences solved the mystery by developing a spatiotemporal and probabilistic model that describes the motion of PER molecules in a cell environment.

This study was conducted in collaboration with Professor Choogon Lee’s group from Florida State University, where the experiments were carried out, and the results were published in the Proceedings of the National Academy of Sciences (PNAS) last month.

The joint research team’s spatial stochastic model (See Figure 2) described the motion of PER molecules in cells and demonstrated that the PER molecule should be sufficiently condensed around the cell nucleus to be phosphorylated simultaneously and enter the nucleus together (See Figure 3 Left). Thanks to this phosphorylation synchronization switch, thousands of PER molecules can enter the nucleus at the same time every day and maintain stable circadian rhythms.

However, when aging and/or diseases including dementia and obesity cause the cytoplasm to become congested with increased cytoplasmic obstacles such as protein aggregates and fat vacuoles, it hinders the timely condensation of PER molecules around the cell nucleus (See Figure 3 Right). As a result, the phosphorylation synchronization switch does not work and PER proteins enter into the nucleus at irregular times, making the circadian rhythms and sleep-wake cycles unstable, the study revealed.

Professor Kim said, “As a mathematician, I am excited to help enable the advancement of new treatment strategies that can improve the lives of so many patients who suffer from irregular sleep-wake cycles. Taking these findings as an opportunity, I hope to see more active interchanges of ideas and collaboration between mathematical and biological sciences.” 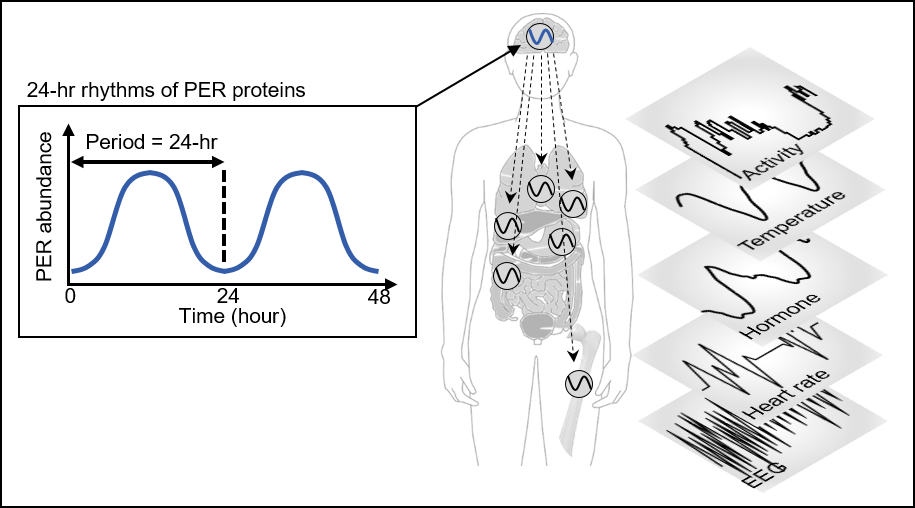 < Figure 1. PER abundance oscillates in a circadian manner through an autoregulatory negative feedback loop. This oscillation enables robust timekeeping of circadian-timed physiological and behavioral processes including sleep. >

< Figure 2. Spatial Stochastic model of the circadian clock. After Per mRNA, M, is translated to protein, R, in the cytoplasm (i), PER transits toward the perinucleus, past obstacles while being hypophosphorylated (ii; gray circle). The accumulated PER in the perinucleus is hyperphosphorylated in a cooperative manner (iii). Then it enters the nucleus and inhibits the transcriptional activity of the activator, A (iv). >

< Figure 3. In normal cell (left), the cytoplasmic flux over several hours increases PER abundance in the perinucleus (pink region in Figure 2) compared with the peripheral cytoplasm (cyan region in Figure 2) (i). This induces a sharp switch-like hyperphosphorylation in the perinucleus due to the cooperativity (ii), followed by synchronous nuclear entry within a narrow time window (iii). When a cell is overcrowded (right), the cytoplasmic flux is hindered, and thus PER does not accumulate in the same gradient as in the normal cell (i). This disables the sharp switch-like PER hyperphosphorylation and nuclear entry (ii and iii). >